Nuts formed a main part of the human's diet 780,000 years ago due to thier high nutritional value! 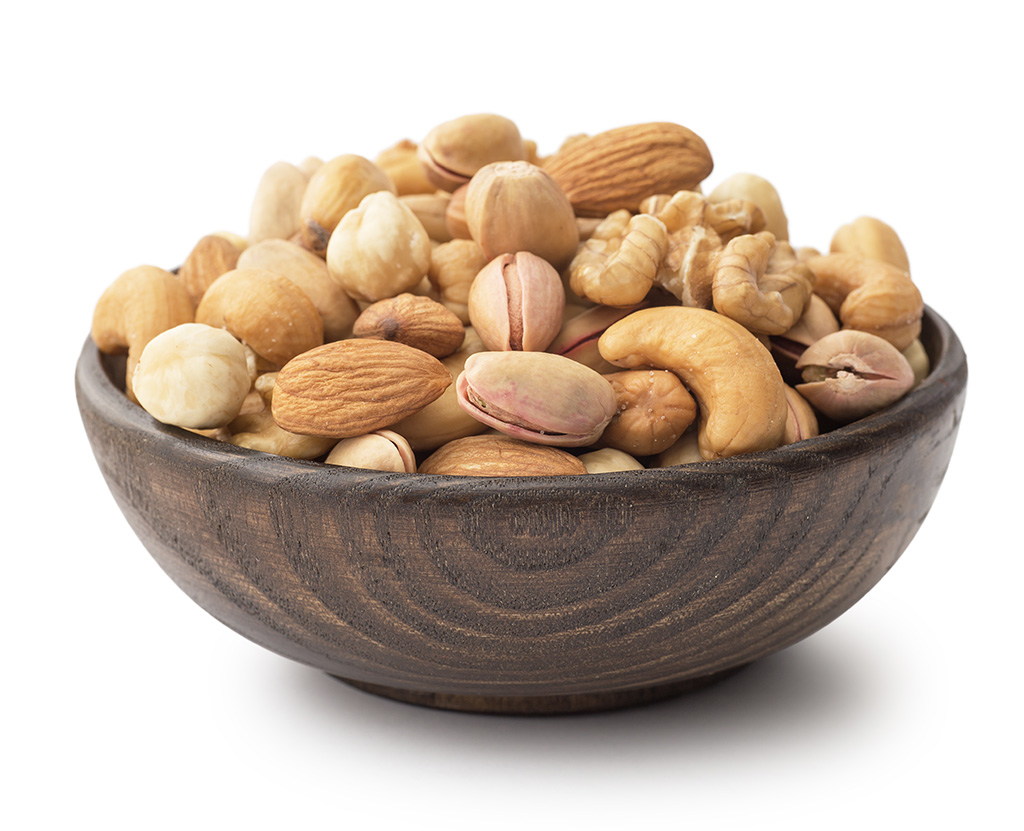 Do you know that nuts, due to its high nutritional value, formed a main part of the human’s diet 780,000 years ago?

The remains of seven types of 780,000-year-old nuts have been found at the Gesher Benot Ya’aqov site in Israel Hula Valley. The nuts and the stone tools found with them are the first evidence that various types of nuts have been a staple food for prehistoric men since the beginning of history and that they had developed an assortment of tools to crack open nuts during Early-Middle Pleistocene period.

The nuts were wild almond, prickly water lily, water chestnut and 2 varieties of both acorns and pistachios. The pistachios and water chestnut are similar to those found in the Far East and northern Europe today. Similarly, the stone tools were revealed to be similar to the ones found by archaeologists in United States and Europe 4,000 to 8,000 years back!

SLG wants to be a trendsetter in the nut-based industry in the areas of product development, product branding and design, and marketing appeal to its customers.

Learn more about the origin and nutritional values of nuts.

Nuts can be a part of your healthy eating plan. They are rich in protein, vitamins, minerals, omega-3 fatty acids, antioxidants and minerals. Best of all, they are cholesterol free. Learn more about the origin and nutritional values of these nuts:

The cashew is a native to northeastern Brazil and have been commonly cultivated in South America by indigenous tribes. Cashew trade began in the 20th century and have since taken off to include large producers like India, Brazil, West Africa and Indonesia. Today, the nuts, fruits and other plant parts of cashew trees are used for a multitude of purposes.

Whether roasted, salted, sugared or covered in chocolate, the nut is often used as a flavourful complement to appetizers, main dishes and desserts. It packs a mix of nutrients and minerals not found in many common foods and is somewhat lower in fat than other nuts, helping them stay fresh longer.

The cashew is an excellent energy sustaining food. It contains approximately 30% carbohydrate, 15% protein with half of their fat content being unsaturated. 70% of this half is oleic acid, the same heart-healthy fat found in olive oil. They are also high in magnesium, phosphates, copper and manganese.

Known as ‘the best, all round nut’, almonds are an excellent food and extremely nutritious. It has a similar composition to olive oil. Of its 50% oil content, 80% is oleic acid, a monosaturated fat, and 15-50% is polyunsaturated omega-6 fat. It also contains a little omega-3 oil and has a small percentage of saturated fat. Recent US Studies revealed that the oil may help prevent heart disease by lowering low-density lipid (bad cholesterol) levels when consumed in the place of saturated fat. It is also a more potent cholesterol-reducing agent than olive oil. Due to its oil content alongside its 20% good levels of dietary fiber and carbohydrate, almonds are slowly digested and thus sustain and normalize blood sugar levels. Almonds are rich in many minerals, including calcium and magnesium, both essentials in building strong bones, as well as manganese, phosphorus, potassium and copper. Copper plays a role in flexibility of blood vessels, bones, joints and in iron utilization.

Almonds also have very high content of vitamin E, giving them high antioxidant properties. Alongside vitamin E, the phytochemicals in almonds may also help protect against cardiovascular disease and even cancer. They are a good source of B vitamins, particularly riboflavin, but also thiamine and niacin, with some folate, essential for energy, protein metabolism, and the synthesis of red blood cells.

Native to the Middle East, forests of pistachio trees grow on hills and mountains of Lebanon to Northern Iraq and Iran under long hot summers and high chilling temperatures. After the Iran war in 1979, most of the world’s pistachio crop disappeared for some time until other commercial orchards were developed. Other major pistachio-producing areas now includes Turkey, California, Israel, Lebanon and Pakistan.

Most of the nut’s oil is not saturated, 13% being monosaturated and 13% polyunsaturated. They are an excellent source of protein, thiamine and fiber. They are also a good source of calcium, magnesium, vitamin A, vitamin C which in unusual as most nuts have none or very little. In addition, they have good levels of potassium and phosphates.

Like all nuts, pistachios are a good source of vitamin E which boosts the immune system and alleviates fatigue. Pistachios contain carotenoids, associated with a reduced risk of macular degeneration, an eye disease that may develop later in life.

The peanut is not a nut, but a species in the legume “bean” family. It originates from South America though remains of peanuts have been found in Peru dated back at 3500 and 6000 BC. By 1900s, the surplus of peanuts has resulted in the development of many peanut-based products like soap and coffee. Important peanut growing countries today include India, China and America.

Peanuts contain approximately 25% protein, higher than in fish, dairy products and many meats and contain the most protein compared to any nuts. They are an excellent replacement for red meat in any diet, particularly for vegans or vegetarians. They contain many B vitamins, and are particularly rich in thiamine, folate and niacin, but also B6, riboflavin and pantothenic acid. Niacin or Vitamin B3 assists in functioning of digestive system, skin and nerves. 1 ounce of peanuts provide one-fifth of the daily niacin requirement.

They have very high levels of minerals such as potassium, manganese, calcium, phosphates, iron, zinc, copper and magnesium. They are also rich in fiber and Vitamin E. They contain folate and good levels of flavanoid resveratrol found in several grape varieties including those that go into the making of red wine. Resveratrol has been associated with reduced cardiovascular disease and reduced cancer risk. Peanuts are thought to help prevent arterial plaques and has anti-inflammatory properties. Studies indicated that consuming a small amount of peanuts can reduce ‘bad cholesterol particles’ or low-density lipids by 14%!

A rice salad with fruit, spices, and Kangaroo Rosemary Pistachios to be served chilled or at room temperature.

Rinse the rice in a sieve and set aside to drain. Warm 1 tablespoon of oil on medium heat in a saucepan. Add the rice and saute, stirring constantly for 3 minutes. Stir in the cinnamon, cardamom, salt, black pepper, grated orange peel and continue to saute for 1 minute. Stir in the water, cover, and simmer for 25 to 30 minutes till rice is tender and water absorbed. In a serving bowl, combine the hot rice and dried fruit, mix. Allow to cool for 20 minutes. Add Rosemary Pistachios, orange juice, and the remaining tablespoon of oil. Stir well. Serve salad at room temperature or chilled.

You may add 1 tablespoon of fresh mint and 1 teaspoon of lemon juice if a little more tang is desired.

Notes: You may use brown basmati rice if desired. Just increase the cooking time to 45 minutes then let stand for 10 minutes with the cover on. The finished salad will have a chewier texture and nutty flavour.

Whisk egg yolks in a bowl. Continue to whisk and pour oil in slowly bit by bit, until it has all been absorbed. Still whisking, add salt, pepper, and lemon juice to taste. Stir in basil, parsley, and Rosemary Pistachios to give a smooth thick sauce.

Beat another egg yolk in a clean bowl and gradually whisk in. The mayonnaise will keep, covered and chilled, for up to 24 hours.

Soy sauce, rice wine, and ginger contribute a rich flavor to the simple but tasty chicken and cashew stir-fry. Inclusive of marinating time, this dish will be completed in less than a hour. For a full meal, serve over cooked rice.

Mix 2 Tablespoons soy sauce, cornstarch, sugar, and vinegar together and set aside.

Rice cooked in fat-free milk with a hint of coconut flavor and Cheddar Cheese Almond crunches. It is a fast and healthier alternative.

In medium saucepan, bring milk and salt to a boil over medium-high heat, for about 3 minutes. Stir in rice. Return to a boil, about 1 minute. Reduce heat and simmer, covered, for 5 to 6 minutes, or till liquid is absorbed.

Crush Cheddar Cheese Almonds in a plastic bag or with the back of a spoon or fork.

Add coconut extract to rice, fluff with a fork, and stir in Cheddar Cheese Almonds.

It would be our pleasure to answer any questions you have with regard to our products. Please email us at customerservice@slg-group.com